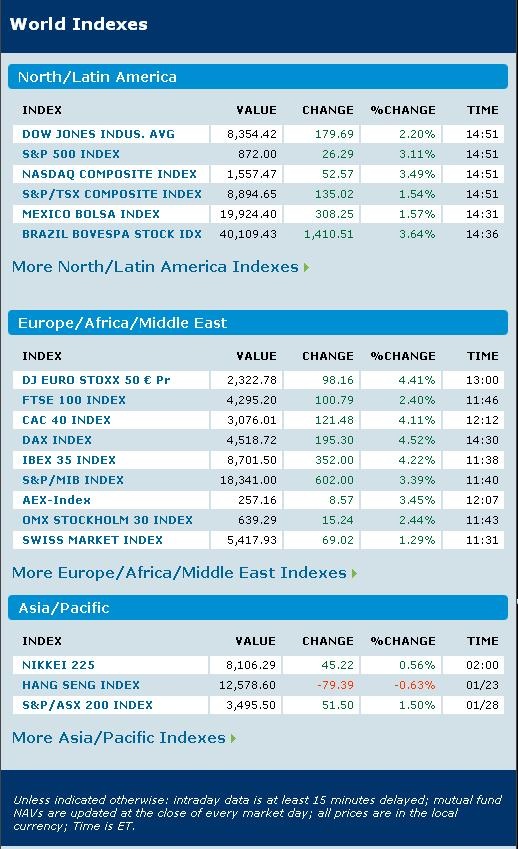 *Rescue Rally: Dow Soars 201
Wall Street rallied around signs of another government rescue for the fragile financial sector on Wednesday, sending the Dow 200 points higher and the S&P 500 to its first four-day win streak since late November.

While the markets were clearly focused on reports the government could soon create a "bad bank" to house banks' toxic assets, Wall Street also cheered the Federal Reserve's willingness to leave interest rates at historic lows and shrugged off a batch of mostly worse-than-expected earnings reports from major companies such as Boeing (BA: 43.21, -0.01, -0.02%) and AT&T (T: 25.98, 0.04, 0.15%).

“People are feeling better about owning equities and less concerned about the significantly negative economic backdrop. You are sensing people are giving the government and new administration the benefit of the doubt,” said Michael James, senior equity trader at Wedbush Morgan Securities. “The headlines over the last several weeks have clearly been pretty negative but you are seeing people willing to look past that.”

The Dow has now ended in the green in each of the last three sessions, its first such streak since the end of 2008. The broader S&P 500 extended its streak to four, the best stretch for the index since November's five-day rally off multi-year lows.

The current win streak is “very significant” but if the markets give back these gains, “we are in a world of hurt again,” said Frank Davis, director of sales of trading at LEK Securities. “It’s a very fragile rally.”

Markets Cheer 'Bad Bank' Report
Financial stocks, the biggest drags on the markets since this downturn began more than a year ago, were easily the biggest winners on Wednesday, jumping almost 13% as a sector on hopes the Obama administration will soon unveil a new rescue plan, possibly one headlined by a “bad bank.”

The Federal Deposit Insurance Corporation may be tapped to manage an entity used to acquire troubled assets from financial institutions as part of a new intervention that could be announced as early as next week, Bloomberg News reported.

“We are putting together what we hope will be a comprehensive plan…We’re looking at a range of options,” Treasury Secretary Timothy Geithner told reporters on Wednesday. Geithner, who was sworn in earlier this week, said he hopes to have a plan released "shortly."

The “bad bank” would be aimed at removing the mortgage-related assets that have bogged down banks’ balance sheets and led to a series of shotgun marriages and bank collapses. Originally this was the intent of the Bush administration’s $700 billion Troubled Asset Relief Program, which instead was used for capital injections that likely stabilized the system but failed to fix the underlying problem.

“The market likes the idea of anything that is going to make the banks healthier….They’ve been the major cause of the problems,” said James.

While it’s not clear if a “bad bank” model would cure the financial markets -- and officials have acknowledged it would be difficult to price the assets -- such a rescue would at least delay banks’ biggest fears: nationalizing troubled institutions by wiping out common equity.

Meanwhile, the other leg of the Obama recovery effort is making its way through Congress as the House is expected to vote on an economic stimulus package Wednesday evening that is worth nearly $900 billion. Republican lawmakers have expressed skepticism about the plan, which mixes tax cuts with spending, but the large Democratic majority makes passage of the stimulus likely.

Fed Holds Steady
As expected, the Federal Open Market Committee kept interest rates at their historically low levels and signaled they could stay there for some time. The central bank appeared to have little to debate as the recession prevented raising rates and last month's unprecedented move to cut rates to a range of 0% to 0.25% left no room to lower rates further.

The FOMC also hinted on Wednesday at buying longer-dated Treasury securities in another potential unprecedented step in its quest to fix the financial markets and reverse this year-long recession. Policymakers said they are willing to buy more mortgage-backed securities and that they see an economic recovery later this year.

In the energy markets, crude oil futures posted a slight rebound from Tuesday’s $4 plunge despite bearish supply data. The price of a barrel of crude settled at $42.16, down 58 cents, or 1.39%. Energy prices briefly took a hit after the government said crude oil stockpiles jumped by 6.2 million barrels last week, more than twice as much as analysts expected.

Corporate Movers
General Motors (GM: 3.39, 0.06, 1.8%) is canceling construction contracts for a Flint, Mich. factory that would have built engines for its electric Volt vehicle, FOX Business learned. While the auto maker hasn’t abandoned its Volt plans, it is ending its controversial “jobs bank” on Monday, impacting 1,600 laid off workers.

Wells Fargo (WFC: 21.2, 4.809, 29.34%) beat the Street with adjusted-earnings of 41 cents per share but posted a 3.8% decline in revenue, missing expectations. The lender, which acquired Wachovia last year also maintained its dividend and said it has no plans to ask for further federal rescue aid.

Yahoo! (YHOO: 12.24, 0.9, 7.94%) saw its shares rise a day after the Internet giant beat the Street with adjusted-earnings of 17 cents per share. However, Yahoo! issued a weaker-than-expected outlook for the first quarter.

Well Point (WLP: 44.39, 1.73, 4.06%) weighed in with a 61% decline in fourth-quarter profit and declined to give a detailed full-year outlook. The largest U.S. health insurer posted an adjusted-profit of $1.34 per share, missing estimates by two cents.