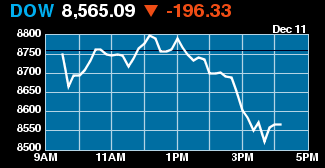 The markets suffered a late-day slide on Thursday as Wall Street had flirted with positive territory earlier in the session. The declines more than canceled out Wednesday’s action, where all three major indexes rose roughly 1% a piece. The markets have been on a recent hot streak that has seen the Dow close higher in ten out of the past 13 trading days despite a barrage of economic reports that have bolstered fears of a deep recession.

"November itself has been a terrible trading month ...(and) December so far is pretty terrible," Dimon told CNBC. "It will be a tough quarter."

Anthony Conroy, head trader at BNY ConvergEx, said: “The comments put a lot of pressure on all the financials and it dragged down the whole market."

Aside from the deteriorating financial stocks, market sentiment was hurt by a new report that showed jobless claims rose to a worse-than-expected 573,000 last week -- the highest level since November 1982. The government also said continuing jobless claims, those filed for individuals on unemployment for more than a week, surged to 4.4 million. The jump of 338,000 continuing claims was unexpected and represents the sharpest one-week increase since November 1974.

Still, the markets didn't react overly negative to the labor report as all three major indexes briefly turned positive in the face of the data.

As has been the case for this whole week, the markets were hanging on every conflicting headline out of Washington as Republican senators threatened to sink auto-rescue legislation that passed the House of Representatives Wednesday evening.

The auto-rescue bill’s chances in the Senate, which could vote as early as Friday, remain in doubt as Republicans have expressed serious reservations about the legislation’s toughness and the idea of using more taxpayer money to rescue failing companies. A day ago GOP Sen. David Vitter said the package has an “ass-backwards” approach to fixing Detroit while Sen. Richard Shelby called the legislation a “travesty.” Sen. Minority Leader Mitch McConnell was also critical of the bill, saying, "We simply cannot ask the American taxpayer to subsidize failure."

However, a compromise bill supported by Republican Sen. Bob Corker has gained momentum and Chrysler LLC and GM have expressed their willingness to support it. The Corker proposal is tougher than the bill the House passed as it mandates the auto makers reduce debt by two-thirds by forcing bond holders to agree to equity swaps and forcing labor costs and work rules be brought in line with Japanese manufacturers. Failure to meet those and other requirements would trigger a Chapter 11 bankruptcy filing.

Meanwhile, crude oil futures nearly eclipsed $48 a barrel even though the International Energy Agency warned global oil demand will decline this year for the first time since 1983. Considering crude’s plunge of $100 a barrel since hitting all-time records in July, many have already been bracing for shrinking demand.

Fueled by a 2.5% plunge for the U.S. dollar, the price of a barrel of crude closed up $4.46, or 10.25%, to $47.98. The commodity has closed higher in two out of the past three days but the recent streak does little to counter a six-day losing streak that ended last week.

Boeing (BA: 40.27, -1.41, -3.38%) announced another set back to its 787 Dreamliner, pushing back first delivery by several months to the first quarter of 2010 due to an earlier strike and manufacturing problems. The company said it doesn't yet know what the impact of the latest delay will be on its earnings.

Sprint (S: 2.08, -0.34, -14.05%) fell sharply after Moody's slashed the telecom's debt into junk status due to economic conditions and "intense competition" in turning around its wireless business. The ratings company also changed its outlook on Sprint from "under review" to "negative."

Urban Outfitters (URBN: 14.98, -3.88, -20.57%) lost one-fifth of its market value after the retailer posted flat November same-store sales but warned net sales may "decelerate" during the rest of the holiday season due to "current uncertainty and volatility in the marketplace."

U.S. Bancorp (USB: 24.85, -2.82, -10.19%), the banking giant that has largely escaped the financial tumult, said it may have $1 billion of bad loans and write downs in the fourth quarter. In addition to net charge-offs of up to $650 million in the quarter, the bank said it expects up to $300 million of writedowns related to various deteriorating assets.

Eli Lilly (LLY: 35.62, +0.61, +1.74%) sees its 2009 earnings per share missing estimates due in part to its recent acquisition of ImClone. The drug maker also reiterated its long-term guidance of double-digit earnings per share growth between 2007 and 2011.

Krispy Kreme Doughnuts (KKD: 2.30, -0.20, -8.00%) missed earnings expectations by disclosing a third-quarter loss of 9 cents per share as revenue shrank by 8.7% to $94.3 million. The company also said it plans to shut a "significant" number of stores.

The government said the U.S. trade gap unexpectedly rose in October as oil imports soared by a record amount and exports were slammed by the global recession. The Commerce Department said the trade deficit rose to $57.2 billion in October despite consensus forecasts for a decline to $53.5 billion. 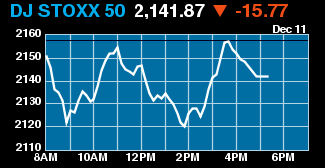 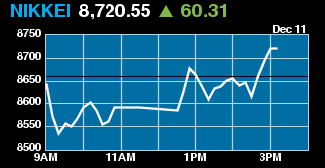