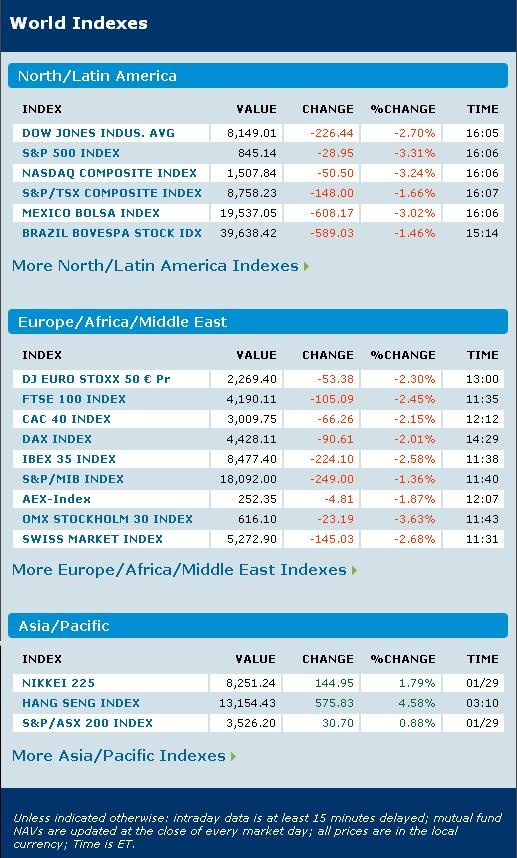 *Back to Reality: Dow Dives 225
Wall Street succumbed to recession reality on Thursday as a crush of new economic reports ended the S&P 500's four-day win streak and overshadowed the House's passage of an $819 billion stimulus package aimed at ending the year-long downturn.

Aside from new reports showing continuing jobless claims surged to record highs as new home sales plunged to all-time lows, the markets were influenced by Ford's (F: 1.95, -0.0699, -3.46%) assurances that it doesn't need a government bridge loan, new layoffs and store closures from companies like Starbucks (SBUX: 9.65, 0, 0%), and the latest stimulus negotiations and bailout talk dominating Washington.

“The economic data just keeps getting worse and worse. Although I think the market has been very euphoric about the backing by the Fed and the stimulus package, there is a fear there that we are pulling out all the stops but if this doesn’t work we might have a real problem,” NSYE trader Doreen Mogavero told FOX Business.

A day ago the Dow soared 201 points in its third straight winning day as Wall Street cheered reports that the government could soon create a "bad bank" to shore up the shaky financial system.

“We don’t exactly have the stats to back up a win streak here,” said Art Hogan, chief market strategist at Jefferies & Co. “You get that enthusiasm, and we’ve seen it before, it goes away. You come back to reality where you get economic data that continues to be challenging."

"Clearly the Democrats have enough votes to get this passed but it's a harsh reminder that partisan politics are still with us and that [makes it] hard to get stuff done, not just the stimulus," said Hogan.

If the upper house greenlights its version of the bill, negotiators would have to hammer out a final version that would then be voted on again. Obama has set a mid-February deadline for the stimulus package to be on his desk.

Meanwhile, the new White House is considering spending an additional $1 trillion to $2 trillion to stabilize the nation's banks, The Wall Street Journal reported. While no final decisions have been made, one option under consideration is a "bad bank" that would buy the banks' troubled assets, the newspaper reported.

The housing market continued its contraction late last year as the Commerce Department said new home sales plunged by a much worse-than-expected 14.7% to a rate of 331,000 -- the lowest level on record. December's ugly sales performance capped off the weakest year for new home sales since 1982.

On the labor front, the government said the number of people filing for unemployment benefits for the first time unexpectedly rose by 3,000 to 588,000 last week.The Labor Department also said claims filed for benefits lasting more than one week surged by 159,000 to 4.8 million -- a new record high.

The Commerce Department said durable good orders, or orders for items expected to last more than three years, fell by a worse-than-expected 2.6% in December.

In the commodity markets, crude oil prices fell for the third day of the last four. Weighed down by the bearish economic data, the price of a barrel of crude settled at $41.44, down 72 cents, or 1.71%, on the day. Oil prices briefly topped $42 per barrel before heading south again.

Corporate Movers
Ford Motor (F: 1.95, -0.0699, -3.46%) said it doesn't need a bridge loan from the government even after the auto maker posted a wider-than-expected adjusted-loss of $1.37 per share in the fourth quarter and burned through $5.5 billion of cash.

Starbucks (SBUX: 9.65, 0, 0%) ended higher a day after reporting a weaker-than-expected adjusted-profit of 15 cents per share and announcing plans to close 300 more stores worldwide and slash 6,700 jobs.

3M (MMM: 56.51, 1.05, 1.89%) beat the Street with fourth-quarter earnings of 97 cents per share but the industrial conglomerate slashed its 2009 earnings guidance due to the recession and reported weaker-than-expected revenue.

Bank of America’s (BAC: 6.78, -0.57, -7.76%) board backed CEO Ken Lewis despite ongoing tension regarding the acquisition of Merrill Lynch and the need for a second government rescue, The Wall Street Journal reported.

Colgate-Palmolive (CL: 65.31, 1.52, 2.38%) beat the Street with adjusted-earnings of $1 per share in the fourth quarter as the company’s revenue rose 0.6% to $3.66 billion. Colgate also backed its first-quarter and full-year guidance, sending its shares higher.

Starwoods Hotels (HOT: 16.39, -0.97, -5.59%) beat the Street with adjusted-earnings of 49 cents per share but the company slashed its full-year and first-quarter guidance.

Symantec (SYMC: 15.46, 0.8, 5.46%) saw its shares rise a day after the security software maker topped estimates with adjusted-earnings of 42 cents per share. The company also issued in-line guidance for the current quarter.