*Wall Street Ends Losing Streak
Thanks to an unprovoked late-day rally, Wall Street ended its six-day losing streak as the Dow bounced off the psychologically-important 8000 level despite a flurry of new financial jitters.

Wall Street made a big comeback effort late in the day, allowing stocks to close well off the lowest levels of the day. The late-day rally came despite the lack of any specific news to erase what had been a broad selloff.

“I don’t think there was a catalyst. Often times when we get to extreme oversold levels, which we are short term, you have the potential for this to happen,” said Michael James, senior equity trader at Wedbush Morgan Securities. “There really wasn’t anything important that happened. This is more of an oversold psychological [rally] than anything fundamental that’s driven it.”

Aside from the latest turmoil in the financial sector, the markets were also influenced by a cluster of other headlines, including oil plunging as low as $33 per barrel, another bleak labor report, the largest calendar-year drop in producer prices since 2001 and Apple (AAPL: 83.38, 4.38, 5.54%) CEO Steve Jobs's leave of absence.

Wall Street has been stuck in another tailspin of late as the Dow had suffered its longest such streak since October. At its low of the day, the Dow sank as much as 200 points to fall below the 8000 level Thursday for the first time since November 21.

Financials in Focus
The focus on Wall Street was once again on the future of the tumultuous financial sector as Citi plunged as much as 25% and Bank of America briefly plummeted to 18-year lows. Shares of both companies and the rest of the sector bounced off those lows, though there wasn't a clear catalyst for the rally.

“It’s rather alarming in fact. In essence, these banks are pretty much underwater. They are insolvent if they had to mark everything to market," Peter Boockvar, equity strategist at Miller Tabak, told FOX Business.

Financial jitters were bolstered again as The Wall Street Journal reported late Wednesday that Bank of America is close to a deal with the government to receive billions in additional aid to help close its takeover of Merrill Lynch. Sources told FOX Business's Peter Barnes that BofA is set to receive about $15 billion of funds from the government's TARP program to help digest and integrate Merrill. The latest rescue is expected to be announced next Tuesday when BofA is slated to report quarterly results.

BofA appears to have bitten off more than it could chew as steep losses at Merrill led the bank to warn the government that the deal could fail. BofA acquired Merrill, then the nation’s largest brokerage, amid the height of the credit crisis in September as Lehman Brothers collapsed and AIG (AIG: 1.41, -0.09, -6%) needed a government rescue.

Also, Citi continues to see its market value disappear as the financial giant struggles to escape another tailspin. The banking conglomerate, which unveiled a deal to spin off prized brokerage Smith Barney earlier this week to raise cash, is now hovering less than $1 per share above the level when the government unveiled a massive rescue last year. Joining a recent chorus of analysts, BofA lowered its expectations for Citigroup’s quarterly results, which are slated for release on Friday.

Financial giant JPMorgan Chase (JPM: 25.919, 0, 0%) gave the markets some relatively positive banking news as it reported a profit of 7 cents per share in the fourth quarter, exceeding expectations thanks to one-time gains related to the acquisition of Washington Mutual.

Still, JPMorgan’s profit was off by 76% from a year ago as the weak economy and credit crisis forced the bank to write down $2.9 billion of bad loans and set aside $4.1 billion to cover credit losses.

Crude Hits $35
On the energy front, crude oil prices fell sharply as the commodity continues to come under heavy pressure from the recession despite unprecedented production cuts from OPEC. The price of a barrel of crude settled at $35.40, down $1.88. Earlier in the session crude plunged as low as $33.20 per barrel -- the lowest closing level in five years.

Apple (AAPL: 83.38, 4.38, 5.54%) saw its shares slide a day after Jobs said he is taking a leave of absence until the end of June as his health-related issues are "more complex" than originally thought. Tim Cook, Apple's chief operating officer, is set to assume day-to-day operations at the tech giant. While the news clearly spooked shareholders, Apple's stock has recovered from earlier losses.

New York Times Co.’s (NYT: 6.17, -0.09, -1.44%) Boston Globe is offering buyouts to all newsroom employees in an effort to cut as many as 50 jobs, the newspaper reported. If too few employees agree to leave voluntarily, the company will resort to layoffs, the Globe reported.

Symantec (SYMC: 13.5, 0.76, 5.97%) CEO John Thompson is one of two candidates President-elect Barack Obama is considering to tap for secretary of the Commerce Department, Reuters reported.

Motorola (MOT: 4.42, 0.33, 8.07%) unveiled plans to slash 4,000 jobs and warned it will post a fourth-quarter loss due to slumping phone sales. The company’s stock rose as JPMorgan upgraded it to “overweight” from “neutral,” citing the latest cost-cutting moves.

Data Dump
Wall Street received a mixed batch of economic news on Thursday, led by a worse-than-expected report that showed initial unemployment claims jumped by 54,000 to 524,000 last week. However, continuing claims filed by those out of work for more than four weeks declined by 115,000 last week to 4.5 million.

Also, the New York Fed’s manufacturing index improved in January to a -22.81 reading but remained near all-time lows as the economy continues to take its toll on the manufacturing industry.

Global Markets
European markets suffered their seventh straight losing session despite another interest rate cut from the European Central Bank. The Dow Jones Euro Stoxx 50 slumped 1.77% to 2257.67 and London's FTSE 100closed down 1.42% to 4121.11. 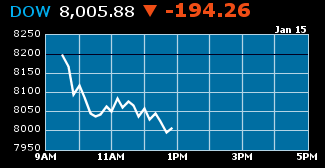 Bank of America, the biggest U.S. bank by assets, plunged 23 percent to an 18-year low. Citigroup Inc., which has already received $45 billion of U.S. assistance, slid as much as 26 percent. Apple Inc. tumbled 4.8 percent on Chief Executive Officer Steve Jobs’s plan to take a medical leave of absence.

“The economic environment and news is the most important factor for the market right now, and it’s not a positive,” said Dean Gulis, part of a group that manages about $2.5 billion for Loomis Sayles & Co. in Bloomfield Hills, Michigan. “Unemployment will continue to rise for some time. It reinforces the sense of overall weakness.”

All 24 industry groups in the S&P 500 retreated after producer prices capped the first annual decrease in seven years and first-time claims for unemployment benefits jumped by 54,000. U.S. stocks yesterday slid the most in six weeks after retail sales decreased at more than twice the rate forecast by economists.

The S&P 500 has dropped 8.4 percent in 2009, its worst start to a year since at least 1978, as companies from Alcoa Inc. to Intel Corp. spurred concern earnings will deteriorate amid the recession and the unemployment rate in the U.S. climbed to the highest level in almost 16 years.

Financial stocks tumbled 6.4 percent, the biggest decline among 10 S&P 500 industries. The KBW Bank Index of 24 companies sank 8.2 percent to its lowest level since July 1995 after breaking through its November low yesterday.

Bank of America fell $2.24 to $7.96. Details of government aid are likely to be disclosed on Jan. 20, people familiar with the situation said. That’s when Bank of America may post its first quarterly loss in 17 years as it digests the purchases of Merrill Lynch and Countrywide Financial Corp. The combined company has already received $25 billion from the U.S.

Citigroup slid 96 cents to $3.57 on concern the bank may be forced to seek more government assistance on top of the $45 billion of U.S. funds that it already received.

Marshall & Ilsley Corp. lost 22 percent, the most intraday in six weeks, to $8.35. Wisconsin’s largest bank posted a fourth-quarter loss on defaults by homebuilders and slashed its dividend.

The S&P 500 has wiped out more than half its gain since rallying from 11-year low in November, a sign the benchmark for U.S. equities may drop more. The index fell 3.4 percent to 842.62 yesterday, below the 843.57 midpoint of its 24 percent advance from Nov. 20 to Jan. 6. To technical analysts, who make predictions based on price and volume history, a so-called 50 percent retracement suggests selling momentum is increasing.

Autodesk Inc. dropped $2.10, or 12 percent, to $15.63. The biggest maker of engineering-design software said it will cut about 750 jobs and reduced its earnings forecast for this quarter as the recession hurts demand. 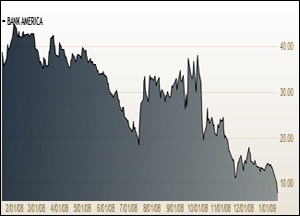 Shares of Bank of America (BAC: 8.08, -2.1, -20.63%) plummeted 25% Thursday following a report that the banking giant is seeking additional billions of dollars in bailout money from the U.S. government to help complete its merger with Merrill Lynch.

Reuters reported that the money would be in addition to the $25 billion of funds the bank has already received from the Treasury Department’s Troubled Asset Relief Plan.

Bank of America’s request, according to The Wall Street Journal, suggests the bank’s Chief Executive Officer Kenneth Lewis may have underestimated the potential damage that may still lie ahead related to Merrill’s huge investment in bad real estate securities.

“It’s not reassuring,” Kenneth Scott, a professor of law and business at Stanford Law School and former general counsel of the Federal Savings and Loan Insurance Corp., told Reuters. “There are more losses to be realized, but the question is the extent to which they are already reflected in values that banks are recording on their books.

Bank of America agreed on Sept. 15 to a shotgun purchase of Merrill after less than two days of negotiations, which sprung from efforts to address problems affecting venerable investment bank Lehman Brothers, which went bankrupt that morning.

Bank of America has estimated the Merrill price tag at more than $24.1 billion, based on regulatory filings. Adding Merrill gave it a huge investment bank, as well as a brokerage unit that Lewis called the “crown jewel” of the takeover.